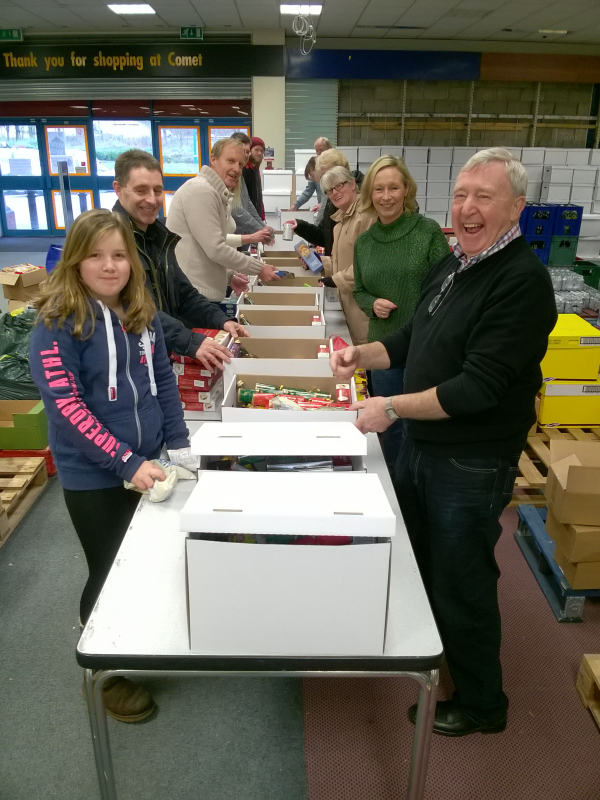 In the weeks leading up to Christmas, our warehouse was a hive of activity. Alongside our regular work in sorting food for the Storehouse Food Bank and Winter Watch, food began arriving for our Christmas Dinner on Jesus Hampers. More than 20 schools, churches, businesses and voluntary organisations across Bolton pledged to collect items to make up the Christmas Hampers. School children, employees, volunteers played their part in buying a packet of mince pies, some chocolate mints …even stuffing mix and gravy! We also received many generous financial donations from individuals and groups across the town wishing to support Christmas Dinner on Jesus, so we could buy the fresh items for the hampers.

Our Food Team had the unenviable job of coordinating the nominations process! Agencies, churches and other organisations put forward names of people who they were supporting but were struggling because of sickness, redundancy, low incomes and distress and would benefit from receiving a hamper.

On 23rd December between 11am and 2pm, over 100 different teams/organisations from statutory agencies, housing providers, faith, school and voluntary organisations, who had nominated individuals and families, arrived to pick up the hampers and deliver them.

Christine, nominated a family and took the hamper to them:

“When I knocked on the door and  introduced myself and then said  ‘Christmas Dinner on Jesus’ it was for a surreal moment like I was an angel or apparition to this lady and her family. I will never forget how she looked at me. After handing over the hamper, chicken and vegetables, not to forget the selection boxes to the children, she threw her arms around me and squeezed me so tight. We stayed like that for a little while. Thank you for allowing me to do this today. I will remember this day for the rest of my life”

Kevan helped to pack the hampers:

“Being involved with CDOJ was so much fun and absolutely amazing!! To see the floor of the unit covered with hampers and bags of fresh food was incredible. How it all got there just blew my mind! The fact that so many people were involved in donating the food and packing it was a miracle in itself and to meet up with friends who had volunteered in previous years was an added bonus. It was fantastic!” (Kevan, volunteer)

In total 1200 hampers blessed 1907 adults & 1720 children, with 1271 chickens, 4800 clementines & 30,000 Brussel Sprouts! Thank you to the hundreds of people who helped make it happen, and brought some joy into the lives of people who were struggling at Christmas.

See photos of Christmas Dinner in action on our Facebook site!